Masada Rifle, known as ACR, was originally designed by Magpul, which was considered to be the best features of each in a single, lightweight, modular rifle platform. It has some features from serval rifles, like the gas system of AR18, upper receiver and cocking lever from MK16 Scar, Polymer Components of XM8 and the trigger system and barrel from M16. 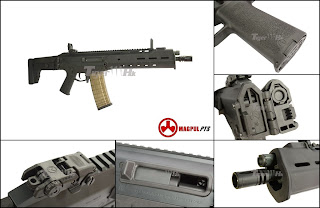